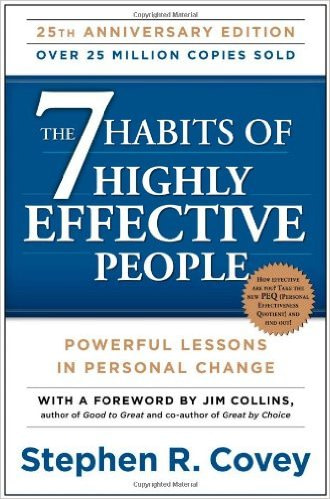 Stephen Covey has made a best-seller named “The Seven Habits of Highly Effective People“, which made him worldwide famous.
I admit that, not all best-sellers are worthy to read. So in this review I’ll only tell you what I thought about it.

What I liked about the Seven Habits of Highly Effective People

– Depth: this book deals with a lot of psychology and makes you question your beliefs and yourself. It’s written in a way that you read it over and over again. At each pass, you understand something new. That’s a sign that the author knows his stuff and has a profound message to deliver.
– real world examples: Stephen mentioned some real world stories he experienced in the past.

– too few exercises: there are only a couple of exercises that Stephen laid in his book. I think he should’ve included more exercises to apply the material.

For whom I recommend the Seven Habits of Highly Effective People

I recommend Stephen’s book to the advanced-level self development enthusiasts and readers. It’s not the kind of books that you read once and then come out with your friends bragging about your new technique :) I recommend it to people who want to look at their lives as a whole and desire to incorporate timeless principles to live by.
You can get your copy of “The Seven Habits of Highly Effective People” here.