In this article, we are going to learn how to configure OSPF route filtering. We will learn how to do that within an area first then between areas.

We will use the following topology. Everything is done in GNS3. I am using the IOS image C3725-ADVENTERPRISEK9-M version 12.4(15)T5 on all the routers.

In order to reproduce this topology, I added the base configuration of each router in the bottom of the article. Routers R1, and R2 are in OSPF area 0. R5 is in area 3. R3 and R4 are ABRs and have LSAs from both areas.

Intra-area route filtering means that we will manipulate OSPF routes within an area.

We want to prevent R2 from having the prefix 1.1.1.1/32 getting installed in its routing table. Initially, router R2 has the following routing table:

As you can see, it has learned a route to 1.1.1.1/32 through OSPF. Recall that all routers within an area have the same LSDB. So it is not possible to filter LSAs within an area to prevent other routers to learn about a specific prefix.

The way to do it is to define a prefix list on R2, and apply it to the OSPF process through a distribute list.

Here is a reminder on prefix lists.

Prefix lists are configured like access lists, one sequence at a time. At the end of each prefix list, there is an implicit “deny any any”.

Line 26 is a bit trickier. It means “anything else is allowed”.

This line of command tells OSPF to apply the prefix list no1-OSPF when inserting routes in the routing table.

The prefix 1.1.1.1/32 is not inserted in the routing table. The other prefixes are still there:

What about the other routers? do they filter the 1.1.1.1/32 prefix? No, the filter applies only to R2. This type of filtering occurs on a per-router basis. So if you had five other routers in the same OSPF area and you want all of them to not install the prefix 1.1.1.1/32, you need to do what you already did with R2, on all five routers.

The ABRs also still insert the 1.1.1.1/32 prefix in their routing tables, since they have the LSA in the LSDB:

What if we want to filter the prefix 1.1.1.1/32 from going out to the world, with distribute-list prefix … out ? That’s correct from an IOS standpoint. I mean the router IOS won’t stop you if you enter “distribute-list prefix {Prefix-list-name} out” command. But conceptually speaking, that’s not possible if we are doing it on a normal router (neither ABR nor ASBR), because all routers within an area have the same LSAs and the same LSDB. So it would be a contradiction to filter LSAs in the outbound direction while having a unique LSDB per area.

Inter-area route filtering means that we filter routes as they enter or leave an area.

If the route we want to filter comes from a different area, then it is possible to filter it and see the changes on all routers of the local area. This is done with area filters.

An area filter filters out LSA type 3 from exiting or entering an area. It is configured at the ABR only, because it is the ABR that generates the LSA type 3.

By the way, area filters use prefix lists too.

First, please don’t confuse LSA type 3 and area 3. The LSA type to be filtered is LSA type 3, no matter what the area number is.

To understand how this works, we will define and apply an area filter at R3 and R4, to prevent R5 router from learning the 1.1.1.1/32 prefix.

Define the prefix list on R3 (because it is an ABR): 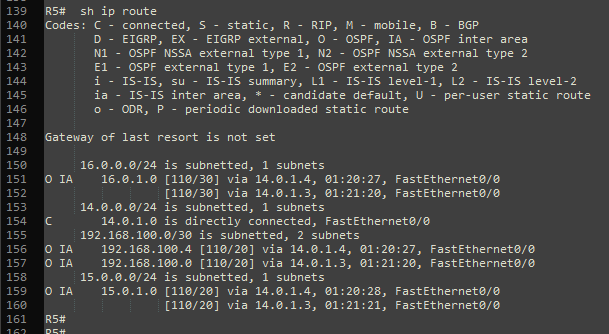 You may have asked “why configure area filtering on both R3 and R4?” That’s because :

If we had not configured area filtering on R4 for example, R5 would have learned about the LSA from R4, installed it in its LSDB and in its routing table: 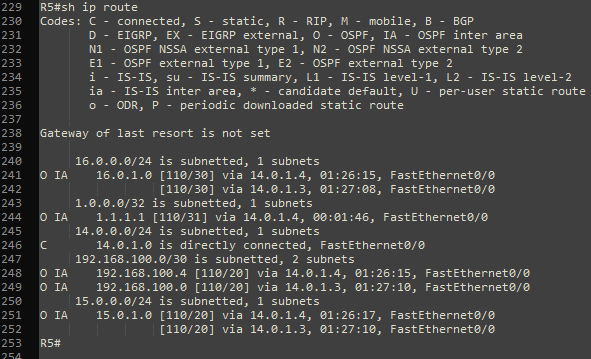 We’ll configure area filters, but this time we will prevent the prefix 14.0.1.0/24 from exiting area 3 and entering the backbone area.

and apply the area filter under OSPF, in the “out” direction:

We do the same thing for R4:

and check the link state database on R2:

What if we want to filter a route that originally entered the OSPF domain as part of a redistribution process? In the previous topology, let’s assume that R2 is redistributing the prefixes of its connected loopback interfaces into OSPF, among which is the prefix of loopback 1 interface:

Since R2 is redistributing connected subnets into OSPF, it sends LSA type 5 to its OSPF neighbors. And that’s exactly how router R1 sees them in his link state database; type 5 LSAs:

An LSA type 5 gives an OSPF route of type External-2 (O E2). That’s confirmed in R1’s routing table. Recall that by default, redistributed routes into OSPF have the type External 2 and have the cost of 20 (except for BGP):

So we need to filter prefix 2.2.2.2/32 and leave the rest of the redistributed prefixes propagate in OSPF. This is done with access lists combined with distribute lists. Filtering must occur at the Autonomous System Border Router (ASBR). In our case, R2 is an ASBR because it borders two autonomous systems: OSPF and the local interfaces.

This way, R2 will propagate all prefixes as LSA type 5 except the 2.2.2.2/32 prefix. It won’t send anything about it out to the OSPF world. And that shows in R1 and R5 link state databases:

and in their routing tables:

What we just did is, redistribute connected subnets on one router, and filter one specific prefix from being learned into OSPF.

The same mechanism can be applied for redistributed static routes, using access lists and distribute lists.

Let’s suppose we have a couple of static routes on R2 that we redistribute into OSPF:

This command will redistribute all static subnets into OSPF. All routers in the autonomous system will learn them as OSPF type 2 routes. For example, here’s R1’s routing table:

This is done at the ASBR, which is R2. On R2, we create an access-list that fulfills the two bullet points above:

Note that the permitted/denied subnet in the ACL must match the prefix in the static route. Since the prefix we are allowing is a /8 prefix, then the permitted access list entry must be a /8 subnet.

There is an explicit “deny” at the end of the ACL.

Then we link the access-list to a distribute list that we apply to OSPF:

What we get is that all routers in the autonomous system no longer receive information about any redistributed prefixes other than 124.0.0.0/8 from R2:

[box type=”note” align=”aligncenter” ] A note on distribute lists: We saw two examples of using distribute lists for OSPF route filtering: with connected subnets and with static subnets. Distribute lists can be used with other routing protocols such as BGP, OSPF, RIP and EIGRP; we can control which routes are redistributed from one protocol into another at the ASBR level.

Here is the base IOS configuration of all routers. You can use these files to reproduce the topology in GNS3.

We learned in this article:

Filtering inbound and outbound routes is a matter of filtering some types of LSAs. And it can be done only on ABRs and ASBRs. Filtering LSAs from entering the routing table on the local router is however possible on any router.