In this blog post I expose the following two features in CUCM: Expected Digits and Num Digits.

Expected digits is a feature that allows CUCM to know how many digits it should receive from PSTN or a gateway. This feature is useful in overlapped dialing.

Overlapped dialing is when CUCM receives the dialed number of an inbound call digit by digit.

Suppose we have an analog gateway such as the VG202, equipped with one FXS port set as POTS, in port type. This port connects to a POTS phone. And when the phone sends the dialed digits, the gateway (and CUCM behind it) could not know how many digits to expect. So it is useful to set the Expected Digits value.

Both Expected Digits and Num Digits are found only with POTS type of ports, on FXS ports.

Here is a sample analog voice gateway setting. A VG202 that has two FXS ports.

Let’s choose the first FXS port and set its type to Loop Start:

If you scroll down the page, you won’t find neither Expected digits, nor Num Digits. 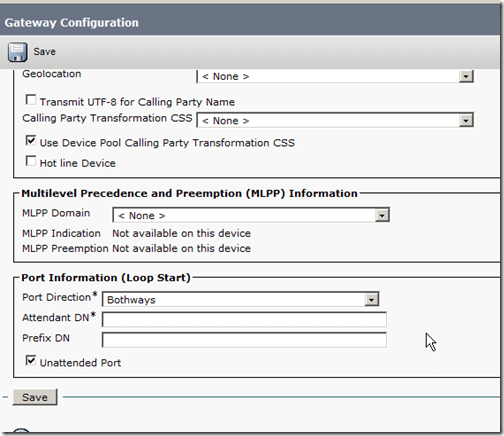 Now, we go back in the menu and set the type to POTS:

And here you find Expected Digits and Num Digits