Here are a couple of notes I gathered around the subject of Cisco Etherchannel. We start by some concepts then learn how to configure L3 Etherchannels.

EtherChannel is a technology that allows a set of ports to be bundled into one logical interface. There is the logical port (the bundle) and one or more physical ports that constitute it. The physical ports are also called member ports.

When one member port fails, traffic that was flowing through it gets redirected over the remaining operational member ports, transparently to the end user and without the network administrator intervention.

A physical port can be a member of only one Etherchannel.

We can configure an Etherchannel between a network device and a router, a switch, a server,…

An EtherChannel can be:

channel-group x mode on : neither PAgP, nor LACP is used. To specify that we want LACP or PAgP, we must choose one of these modes: desirable, auto, active, passive.

The channel group number must be the same on both ends of the bundle.

I am going to discuss L3 EtherChannels on a Cisco ISR only (such as the famous Cisco 2811 router).

A layer 3 Etherchannel is also called port channel. For inter-VLAN trunking, it only supports IEEE 802.1Q.

A Cisco ISR does not support layer 2 EtherChannels. But, if it is equipped with an EtherSwitch service module, this one supports both layer 2 and layer 3 EtherChannels.

Beware that LACP and PAgP do not work on an ISR if you want to negotiate port aggregation. Simply configure the EtherChannel manually on both ends of the bundled link (even if the other device supports these protocols).

When we make an interface a L3 one, and it’s a part of an etherchannel bundle, then it disassociates from it. A show etherchannel summary shows this: 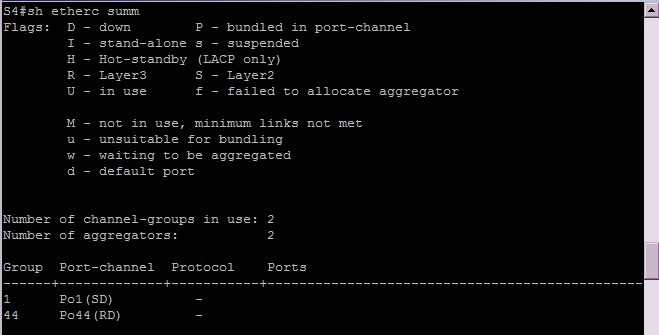 After we make the interface as L3, we should re-put it into the etherchannel bundle with channel-group x mode … command.

Then, we make the port channel as L3 with no switchport

Now, if we do this on both sides of the etherchannel, we get two L3 interfaces. That means they behave like normal router ports! Let’s give them IP addresses and ping each other:

Load Balancing in a layer 3 EtherChannel

Also, VLAN ID has no impact on load balancing.

Bandwidth aggregation in an EtherChannel

Bundling a set of interfaces into an EtherChannel allows to have an aggregation of the interfaces bandwidth, in Catalyst switches. However, in ISR routers, there is no guarantee that this holds true. In fact, don’t make EtherChannels on routers if your goal is to increase the bandwidth between the router and the other device. Cisco does not guarantee that your EtherChannel will operate at an aggregate wire rate speed. Your only purpose of doing EtherChannel between an ISR router and another device is to have load balancing and to increase redundancy.

If we change the default method, we must

We learned in this article what etherchannel are, the difference between layer 2 and layer 3 etherchannels. We also learned how to configure a port channel and we saw some commands to display the etherchannel configuration.

How much do you see Etherchannel configured in your production network?