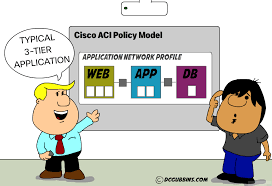 This post summarizes my study notes on the topic of ACI End Point Groups (EPG).

A Network Engineer can consider an EPG to be a sort of container. And if you’re familiar with Linux Containers, I’ll avoid that term for a while and say a “placeholder”. So an EPG is a placeholder for end hosts to which we can apply a set of network policies.

That means, an EPG is a placement in the network where we can enforce policies on a group of end hosts.

The end hosts can be: physical servers, virtual machines, Linux Containers, clients from the Internet, etc.

But how are end hosts going to be put in the adequate EPGs? Or how does the APIC do that? Don’t we configure a VLAN under a switch port and thus group end hosts on a VLAN ID basis?

The principle of how an end host is assigned an EPG is based on a traffic classifier. And the traffic classifier in ACI (as far as I know) is the encapsulation identifier (Encap ID), whether it is the 802.1Q VLAN ID or the VXLAN ID aka VNID.

So whenever some sort of traffic comes at the leaf port, the leaf reads the Encap ID, and if it finds a “matching” EPG , it applies the EPG settings and the access policies to the port.

Within an EPG, end hosts communicate together freely, no matter which subnets they are in. However, a Network Engineer can insert some filtering to control which and how an endpoint communicate with another in the same EPG. This filtering mechanism occurs with either isolation (intra-EPG isolation) or Contracts (intra-EPG Contracts).

Between EPGs all communication is denied. This is the default behaviour when you configure a VRF. That means ACI acts like a firewall at line rate denying traffic between EPGs.

Also the communication between ACI fabric and external network devices is by default denied unless we define one or more contracts between an internal EPG and the external EPG. We’ll learn about internal and external EPGs later.

A Network Engineer has the option to activate/deactivate Microsegmentation during the configuration menu of the EPG itself.

Whether it is intra-EPG isolation or intra-EPG Contracts, we implement the filtering:

and in both cases we implement different VLANs between the ACI fabric and the hypervisor.

Selecting pre-provision as a Resolution Immediacy when associating an EPG to a VMM Domain will push the policies linked to the EPG to all leafs impacted by the access policies.

An EPG can also be categorized in terms of providing or consuming a contract:

The default Out-of-Band EPG is an application EPG that is created by default in every ACI fabric. It comes under the tenant mgmt and may be used for connecting a virtualization server to a leaf over the Infrastructure VLAN.

We configure EPGs under the Tenants –> (select your tenant) –> Application Profiles. We can either create the EPG with a standard right-click:

or with drag-n-drop within the Topology tab:

After dropping an EPG symbol in the window and configuring it, it will not be created unless you press the Submit button.

As soon as you create an EPG instance, new menus appear under it. We can for example associate the EPG to a bare-metal domain or a VMM domain, we can define Static Path Bindings, we can define contracts…

The EPG Static Ports menu is where we configure what is called Static Path Binding or Static Binding: it aims at defining a set of “traffic selectors” that statically put the traffic coming on to the fabric leaf port into an EPG X. The most common traffic selectors are the leaf port and the VLAN ID (or Encap in ACI language).

Under the EPG menu, right-click on Static Ports and select Deploy Static EPG on PC, VPC, or Interface:

The Static Port EPG configuration window opens. Within this menu we have to decide if we are going to configure a normal port, a port channel or a virtual port channel (vPC). And for each choice we make, a different set of configurable objects will be displayed accordingly.

Here is the configurable objects in case we choose to configure a single port:

Here is what we get when we choose Direct Port Channel or Virtual Port Channel: the object Node is not an available configurable object anymore:

The value we configure for Port Encap should be chosen from the range (or ranges) within the VLAN Pool that is indirectly associated to the EPG:

Click here to read the rest of my Cisco ACI study notes.